These crispy baked vegan cheese stuffed mushrooms are crispy on the outside, soft on the inside and filled with ooey, gooey, vegan queso. 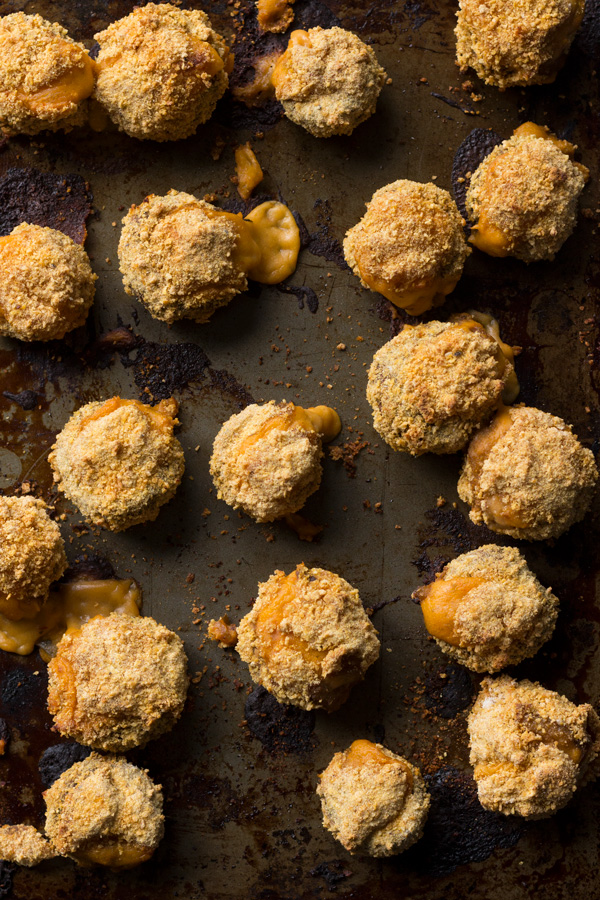 I’ve been using any and every excuse to make and devour this easy vegan queso. After using it as a dip for all the things, I eventually gave up the pretence and just started drizzling it on everything. I’m talking burrito bowls, taco bowls, breakfast burritos and even plain pasta and rice.

Then this weekend I finally graduated to stuffing. First I used it in some 3 bean quesadillas (which were delish btw) and then these baked vegan cheese stuffed mushrooms which are also to die for.

From experience, I know that mushrooms are a great way to bulk up a meal without adding a ton of calories, fat or cholesterol. They basically just take on the taste of whatever you season them and really don’t detract from the rest of the meal.

Plus, mushrooms are also a great source of vitamin B, vitamin D and selenium, which has antioxidant properties. 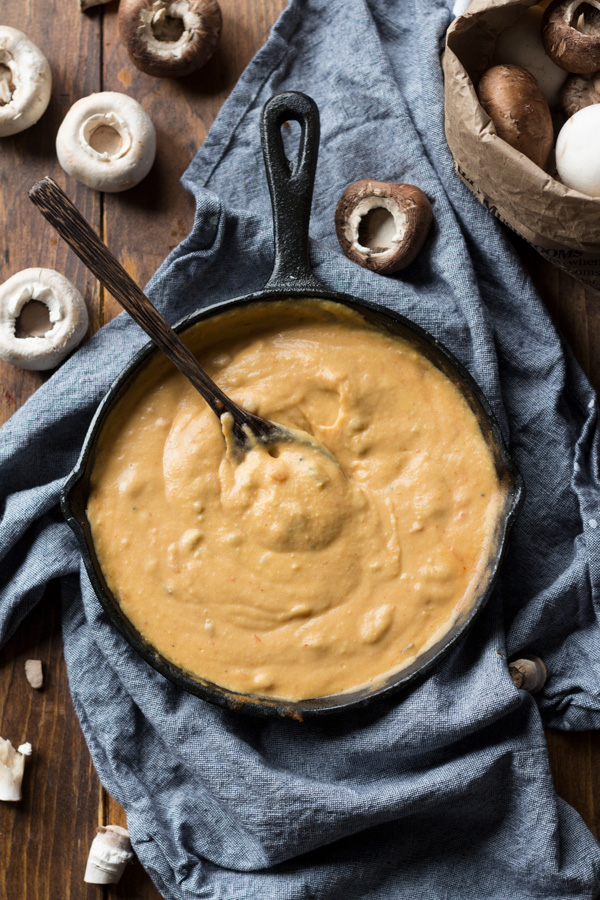 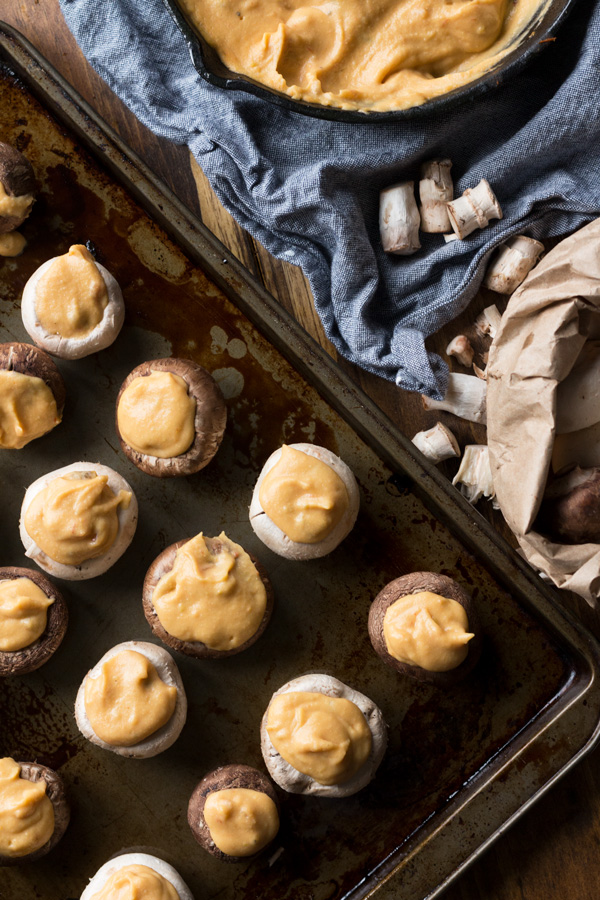 The only occasional downside of mushrooms, at least for me, for me is their texture. I’m a huge texture person and if something is too soggy – like mushrooms can become when overcooked – I’m lucky if I can force it down without gagging.

Usually when I’m cooking with mushrooms, I throw them in at the very end of the meal so they stay on the firmer side. However, that wasn’t really possible with these baked vegan cheese stuffed mushrooms.

I actually had to go through a couple iterations before I found a baking method that didn’t end in a hot mess. 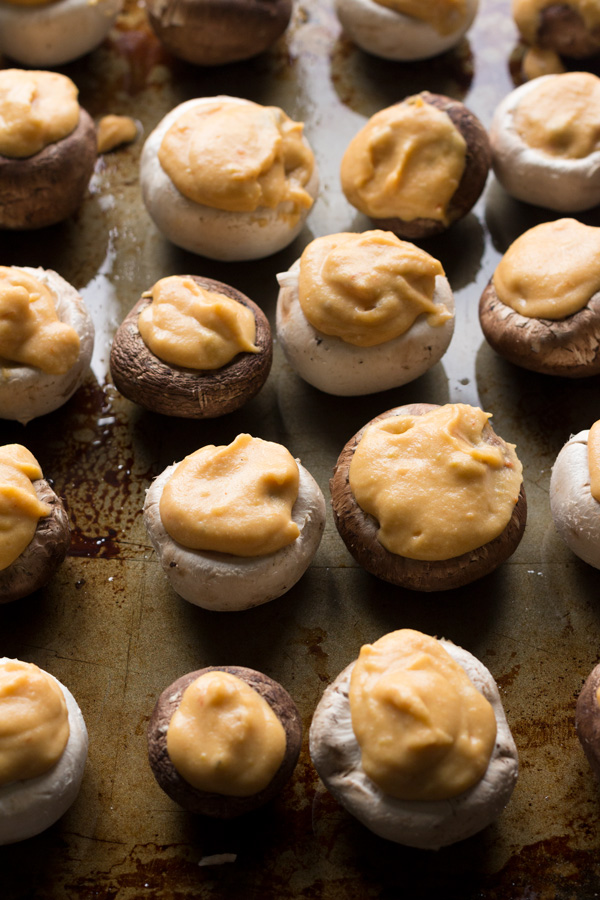 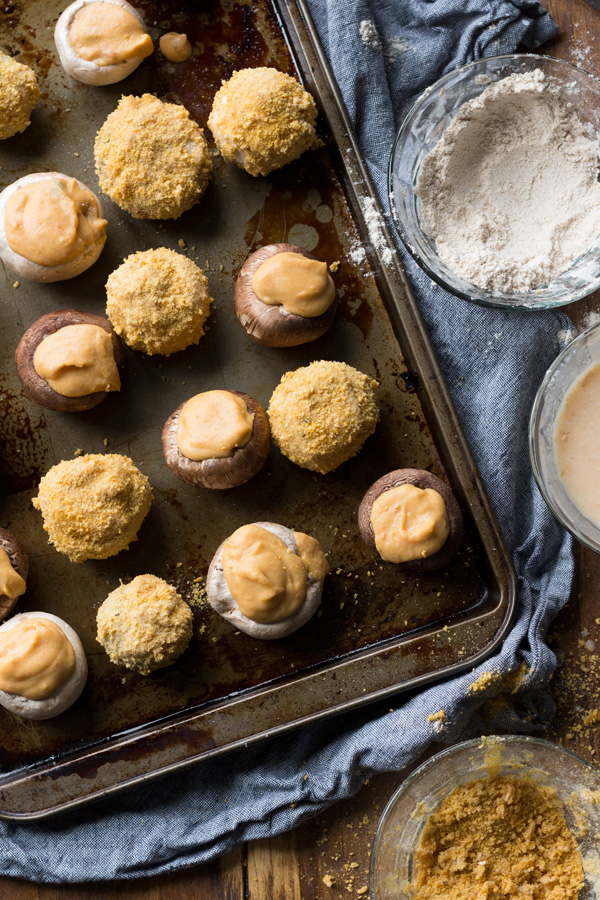 But eventually I figured out that, I needed to spray the outside with a little oil so the breading crisped up quickly without over baking the mushrooms.

The result? Baked vegan cheese stuffed mushrooms that are crispy on the outside, soft (but not soggy!) on the inside and filled with ooey, gooey, melty vegan cheese. And the best part? It only takes about 25-30 minutes from start to finish if you make the vegan queso ahead of time.

If you make these vegan cheese stuffed mushrooms, I’d love to hear what you think. Leave a comment and rate the recipe or take a pic and tag it @ExSloth on Instagram!

Print
Prep time
15 mins
Cook time
15 mins
Total time
30 mins
These crispy baked vegan cheese stuffed mushrooms are crispy on the outside, soft on the inside and filled with ooey, gooey, vegan queso.
Author: GiselleR @ ExSloth.com
Recipe type: Appetizer
Cuisine: Vegan
Serves: 25
Ingredients
Instructions
Notes
I used spelt flour but you can sub for white, whole wheat or most gluten-free flours
I used cornflake breadcrumbs because they add a really good crunch but plain or Panko breadcrumbs should work just as well
3.5.3226