As I mentioned on Monday during my sleep deprived ramblings, I’m still a lot pumpkin obsessed and I’ve been having a lot of fun experimenting with it in the kitchen. Case in point: These vegan pumpkin spice baked donuts. 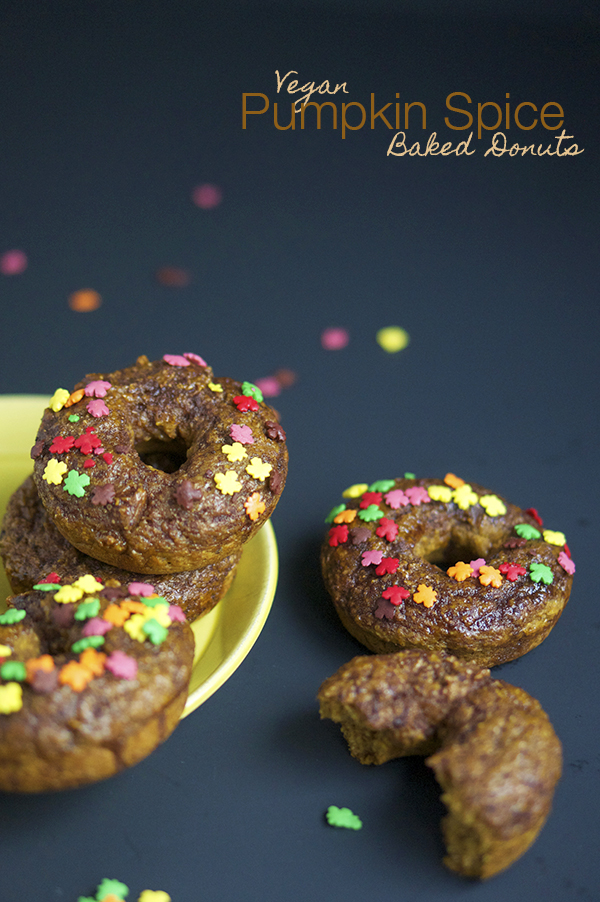 Ever since I started baking and cooking more for the blog, I’ve been my own taste tester. Most of my roommates have been ‘allergic to healthy’ (their words, not mine) so I’ve just gotten used to eating most of my stuff myself. But, these pumpkin spice donuts took a while to perfect. In fact, it took me four tries to get them the way I wanted.

While they’re healthy, eating 24 donuts in the space of a week, is never a good idea. So, after batch no. 2, I decided to call in reinforcements and asked a friend if she’d be my taste tester for the day. 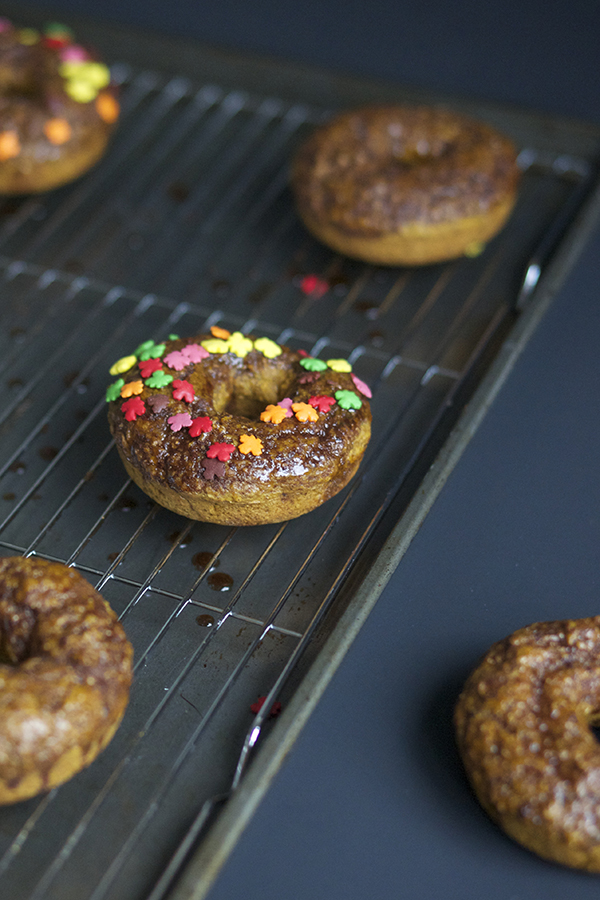 I was seriously humbled and touched that she was so blatantly excited about trying my donuts. Especially since she is an awesome baker. Seriously, her banana muffins have brought me to tears more than once.

But back to the point. When I was younger, like 11 or 12, I spent a summer trying to bake a sponge cake. I used a recipe out of one of my mother’s cookbooks, and I must have made that thing at least once a day. But the cake was always just barely edible.

At first I thought it was just the recipe, but even my boxed brownies sucked. And don’t get me started on my lack of finesse with pancakes as a teenager. For a long time, I was convinced I could never do anything mediocre in the kitchen, far less something amazing. 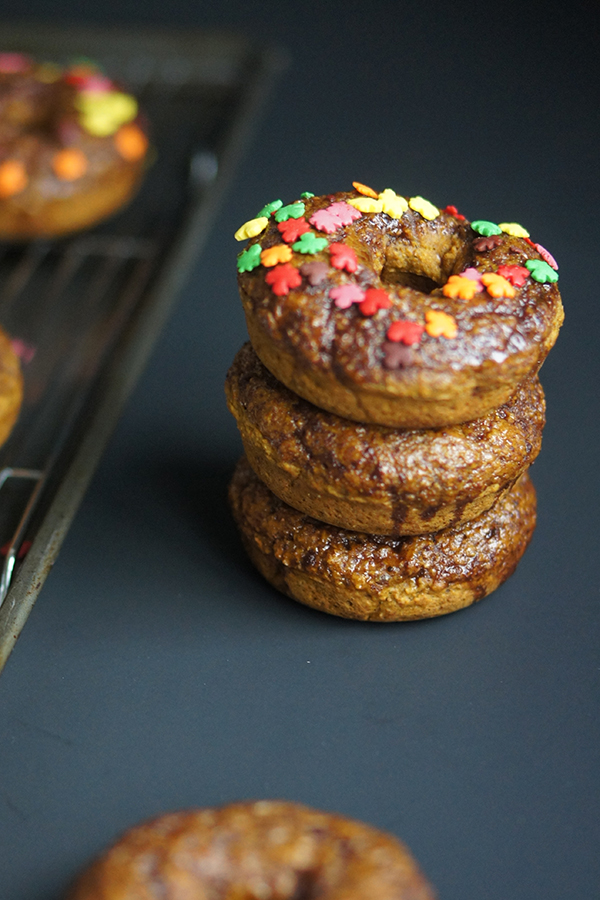 Even though I’ve been at this baking thing for a while now and I think the stuff I come up with is pretty damn good, I’m still startled whenever I get positive feedback. Sometime’s I forget how far I’ve come and it seems strange that someone would actually want to eat something that I make.

But, based on the reactions of my friends – both real-life and virtual (all of you) – I shouldn’t worry. So, I’ll just sit back and enjoy my donut.

Speaking of donuts, did I mention that these vegan pumpkin spice donuts are soft, cakey, moist and, best of all, pumpkin-y? Plus, it’s topped with a maple pumpkin spice glaze that seriously enhances the pumpkin-y goodness.

Be prepared to reach for seconds. 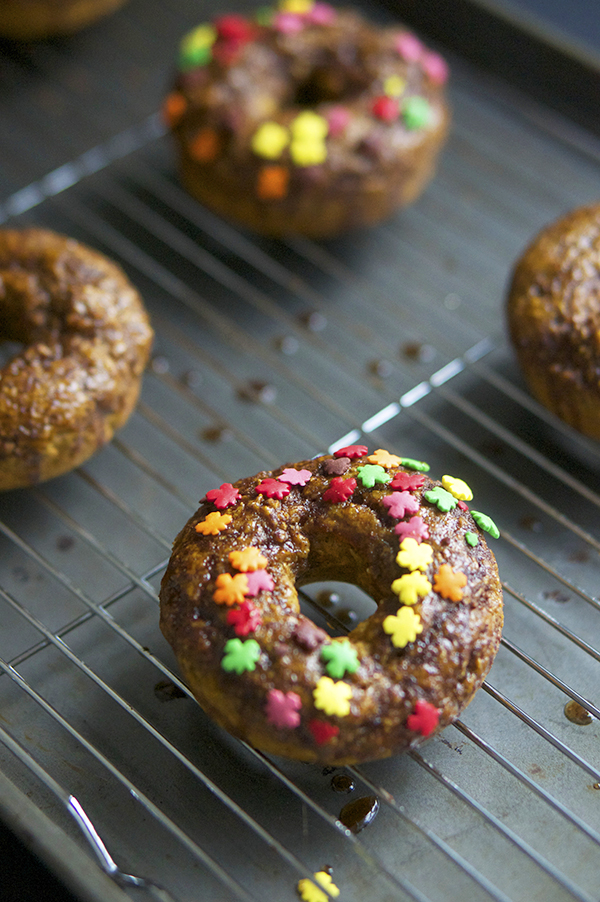 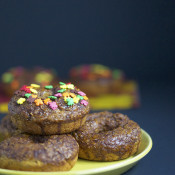 Print
Prep time
10 mins
Cook time
12 mins
Total time
22 mins
These vegan pumpkin spice baked donuts are a delicious, healthier alternative to regular friend donuts. They're also soft, cakey, moist and extra pumpkiny.
Author: GiselleR @ Diary of an ExSloth
Serves: 6
Ingredients
Instructions
Notes
These donuts are best eating the same day, but they can be stored at room temperature in an airtight container for 2 to 3 days.
3.2.2885 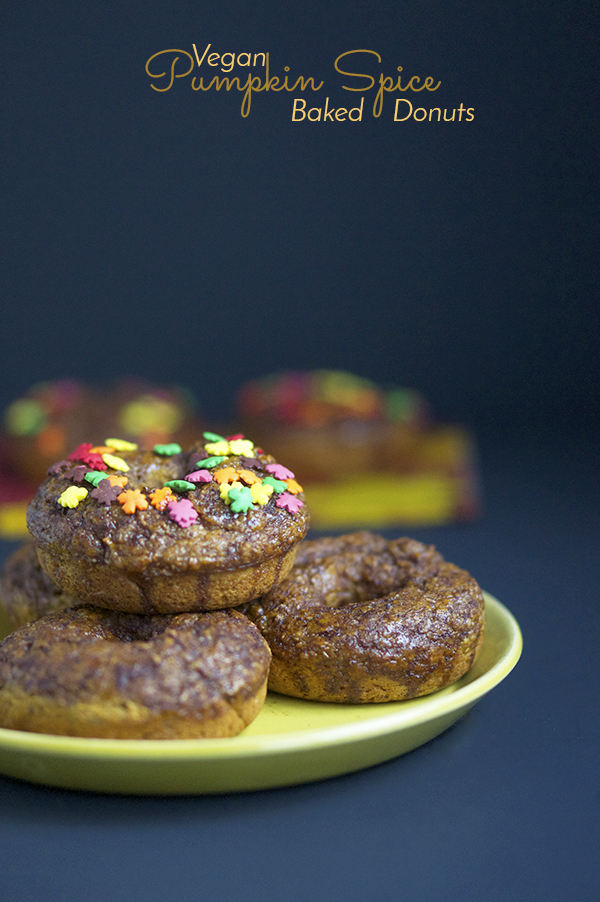 Are you a good cook/baker? Have you always been? What can you do now that you never thought was possible for you? Thoughts/Questions on pumpkin spice donuts?