I’ve said it before and I’ll say it again: breakfast and dessert are my favourite times of the day. However, I’ve been pleasantly surprised by how much fun I’ve had experimenting with cooking and not just baking. And on that note, today I wanted to share my newest find/creation with you: Vegan Fried Quinoa with BBQ Sriracha Tofu. 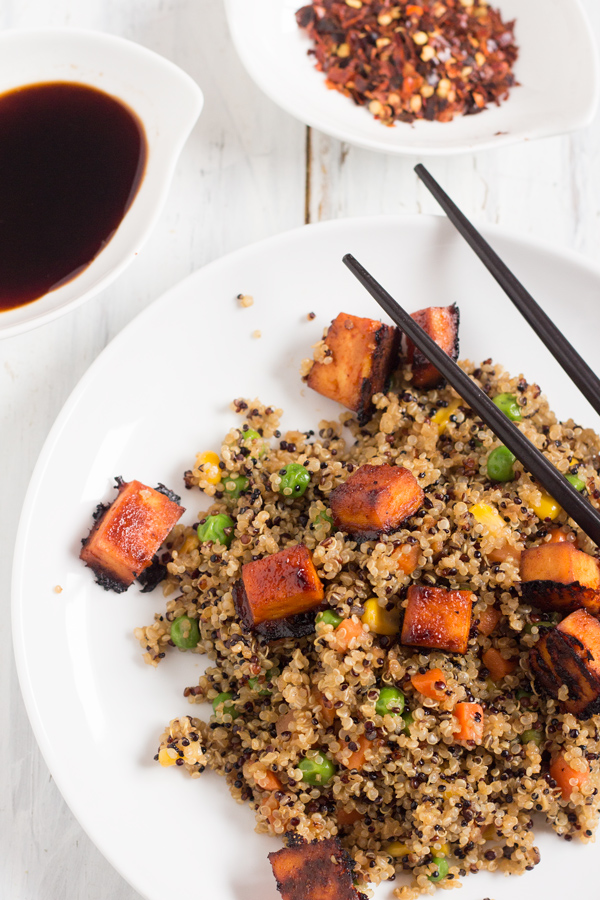 If you follow me in Instagram, you may have seen me post something similar to this meal a couple days ago. But, instead of vegan fried quinoa, that one was vegan fried rice. I had all intentions of sharing the fried rice version today. But when I was pulling out ingredients to make a batch specifically for photos yesterday, I realised I had no leftover rice.

Fried rice is best, in my opinion, when you use cold/day-old rice, sort of like french toast but…not. The cold rice holds the flavour better somehow and the rice also doesn’t get mushy from the immediate double cooking. My only solution was to use the day-old quinoa I had in the fridge. I was a little reluctant because I’d made not-vegan fried quinoa before which unfortunately turned into a soupy, eggy mess. Not appetising at all. 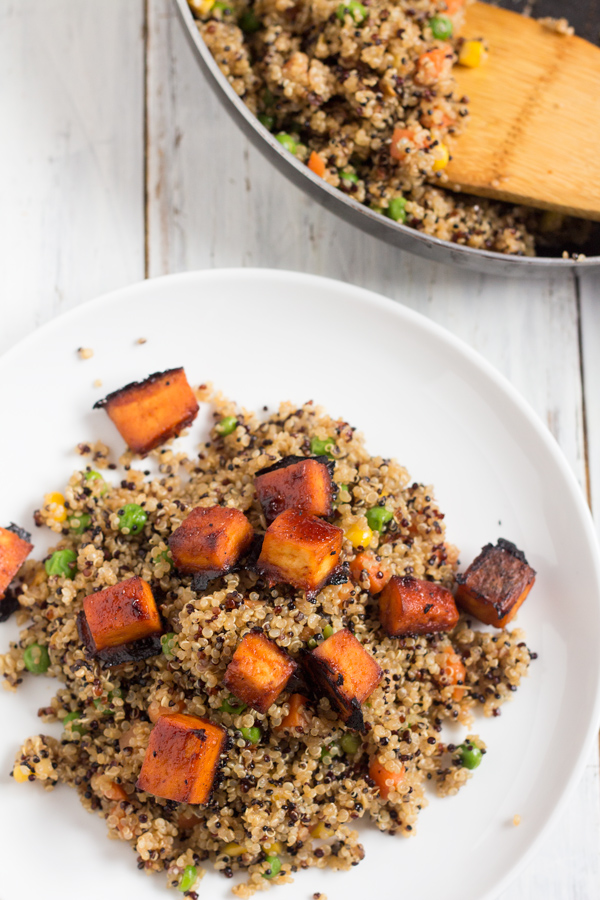 But since I didn’t plan to include eggs, this time, I decided to give the quinoa a try. Plus, I really didn’t have anything to lose at that point. Luckily, the stars aligned and my experiments resulted in the most flavourful vegan fried quinoa. Seriously, it may have actually surpassed the original for me. 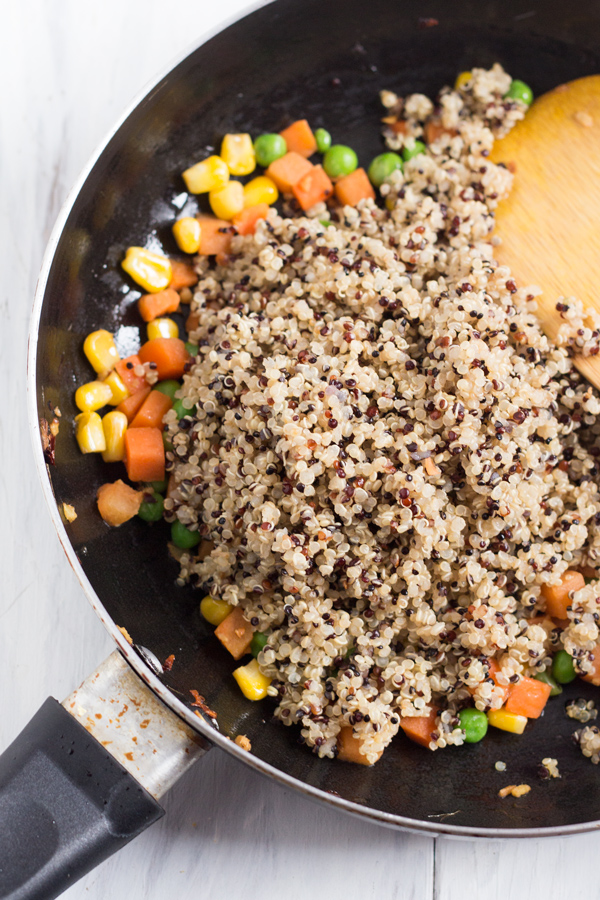 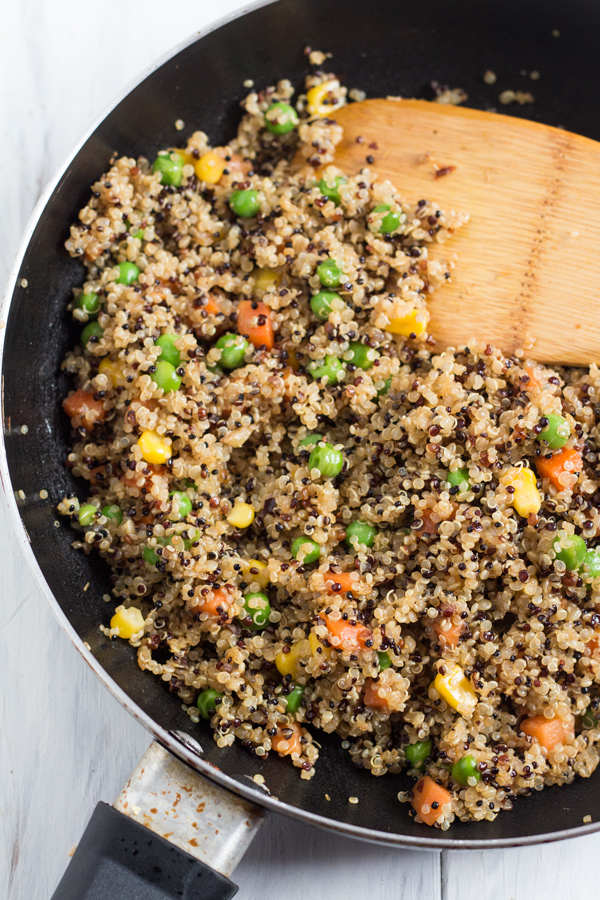 Now that we’ve covered the vegan fried quinoa portion of the meal, let’s talk about the BBQ sriracha tofu. 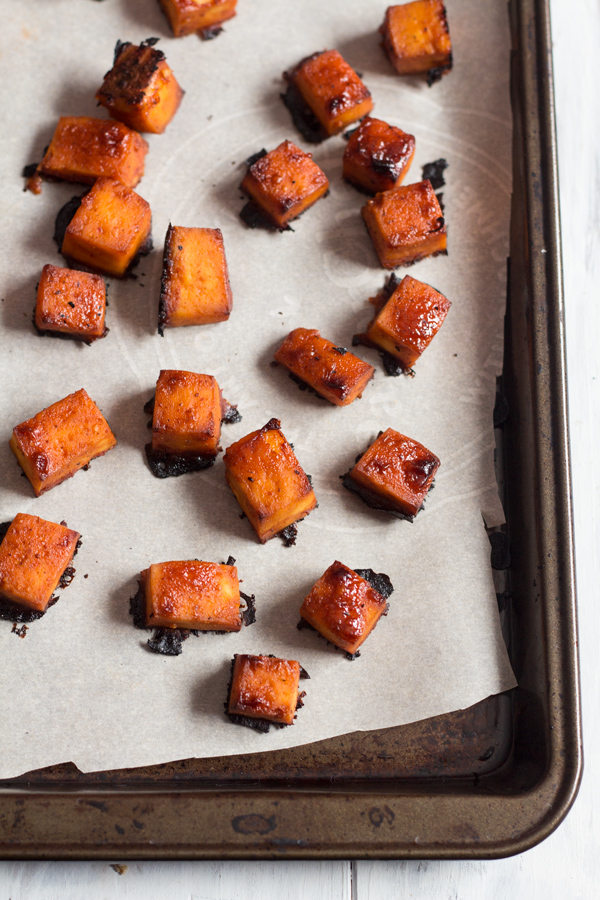 When most people think fried rice or, in this case, fried quinoa, they usually associate it with Asian food. However, in Trinidad, vegan fried rice is a staple at BBQs. So when I was trying to decide what to serve with the fried quinoa, I immediately started craving bbq. And the bbq sriracha tofu was born.

The marinade/sauce is simple and only calls for 3 ingredients, but it packs quite the tangy-sweet flavour punch. And when combined with the vegan fried quinoa, you’re left with a delicious, veggie-filled plant-based meal that’s guaranteed to have you craving more, or at the very least, licking your plate. 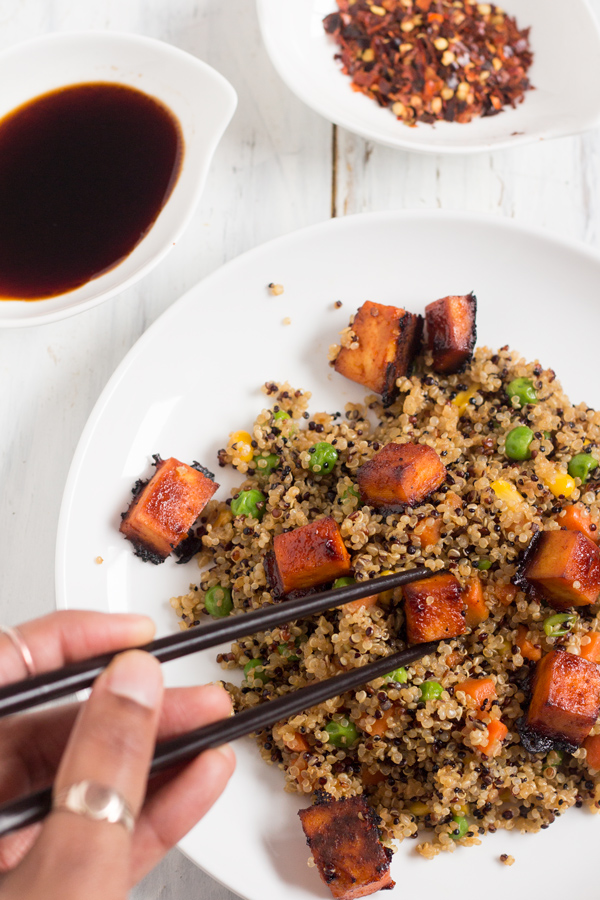 Loved this recipe? Don’t forget to pin for later!