Spoiler alert: Baked goods are my favourite. Kidding. Everyone should know that by now. I’d honestly eat all the baked goods if I could. Unfortunately, too much white flour and refined sugars aren’t exactly good for you, so I’ve had to keep a careful eye on my consumption of baked goods.

I’ve also put together a printable cheat sheet to help you easily replace white flour when baking on the go. If you’re already a subscriber, check the subscriber-only area, type in the password and you should see the printable there. If you haven’t subscribed or forgot the password, just hit the image below!

I’ll preface this by saying that making substitutions in baking isn’t an exact science. There’s always going to be a level of trial and error involved since different recipes handle substitutions differently. But, I do have some tips that make substituting flour a little easier for me, and I hope they’ll be helpful for you as well.

This is the most used flour substitution in my baked goods. Whole wheat flour is full of nutrients and flavour and also adds a little extra fibre to your baked goods. But, be prepared for your whole wheat cookies and cakes to be a bit denser, heavier and darker than ones made with white flour.

Early on in my white flour substitution career (heh) I made the mistake of subbing all white flour for oat flour in a batch of muffins. They weren’t exactly bad, but they were extremely dense and and a strange gummy/soggy texture. Not exactly what I was going for. Now, I tend to replace white flour with a mix of oat and whole wheat flour when I’m making muffins and pancakes.  It gets a little tricky when recipes only call for a cup or less of flour, but I generally replace 1/4 to 1/3 of white flour with oat flour and do a whole wheat flour substitution for the rest.

I have to admit, I was pretty skeptical about this one when I first read about it since I haven’t always been a big lover of beans. Plus, there’s the whole ‘danger of undercooked beans’ thing. But both times I’ve tried using beans in place of flour, have resulted in some surprisingly yummy treats. Chickpeas and black beans are the most popular substitutions, but I’ve also tried black eyed peas with great results. Obviously, you should only use black beans when cocoa powder is involved, since the beans will turn your treats brown. But, other than that, this substitution is smooth sailing.

Substitution Tip: Depending on the recipe, if I wanted to replace 2 cups of white flour, I’d use 1/2 to 3/4 cups buckwheat flour and 1 to 1 1/4 cups whole wheat flour.

I’ve only attempted this once with almond flour and it wasn’t exactly the best experience, but I’m giving it the benefit of the doubt until I try it a few more times. Nut flours don’t rise the same way wheat flours do so it isn’t usually recommended to replace all wheat flours with nut flours unless you absolutely have to. But if your can stomach the wheat & gluten, I’d do a similar substitution to the oat flour substitution:

Recipes using nut flours: I’ll keep ya posted on my nut flour experiments once I start to use them a little more often!

I’ve had a wheat sensitivity for as long as I can remember but it was never bad enough for me to give up eating things that contain it (unlike my issues with dairy). That being said, I decided to start experimenting with spelt flour last year because a few naturopaths suggested it as an alternative. I’ve been baking almost exclusively with spelt flour for past year or so and I’ve loved the results. It’s pretty similar to wheat but has a few differences that make it easier to digest, which is always a plus.

Substitution tip: For best results replace 1 cup of white flour with 1/2 cup whole wheat and 1/2 cup spelt. If you’d prefer to replace all the wheat flour with spelt, make a one to one substitution, but reduce overall liquid by about 25%

For the longest time, I refused to bake with coconut flour because it’s just so unpredictable. But there are loads of people who swear by baking with coconut flour so I know it can’t be all bad. The issue with this one is that it’s super absorbent. So attempting to substitute wheat flour with coconut flour ends in disaster more often than not. It’s much easier to start from scratch and develop an entirely new recipe than attempt to convert an existing one. But if you absolutely must make a substitution, I’ve given some pointers below that may be useful.

Substitution tips: Replace 1 cup of wheat flour with 1/4 – 1/3 cup of coconut flour and double or triple the number of eggs (or egg replacement) used. 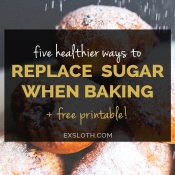 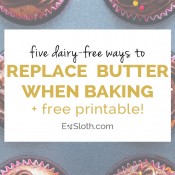 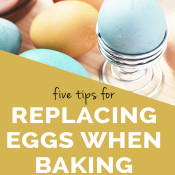 5 tips for replacing eggs when baking 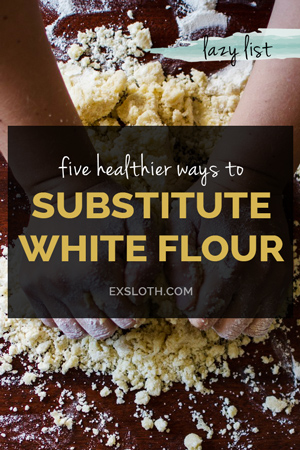