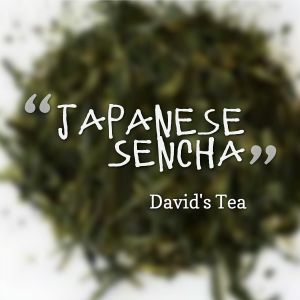 This afternoon I decided to try the Japanese Sencha tea from David’s Tea. It sounds pretty fancy, but it’s pretty much just green tea, from Japan.

Japanese Sencha tea contains catechin which is said to lower the risk of heart disease, defend against cancer and aid in weight loss.

The Japanese Sencha tea leaves smelled like…well like leaves. It didn’t have the earthiness of the pu’erh though, it was more of a crisp, dry scent. It wasn’t especially appetizing, but it wasn’t revolting either.

The first time I tried a green smoothie, I went heavy on the spinach and wasn’t well versed enough in green smoothies to add bananas to mask the taste. The Japanese Sencha tea kind of reminded me of a watered down version of that. The spinach taste wasn’t overwhelming or anything but it was there in the back of my throat for the whole thing.

It was another cold and grey day in Waterloo today. Unfortunately, unlike the mango madness yesterday, the Japanese Sencha tea did nothing to improve my day. But it did warm me up so at least that’s something 😉

What do you think of the Japanese Sencha Tea from David’s Tea?

Although I didn’t hate it, I’m not gonna be rushing for another cup of this one any time soon 😕