First of all I wanted to say thank you for all your kind words on my post last week. It took me weeks to finally talk myself into publishing that post because talking about my weight gain while eating whole foods felt a bit too personal for the blog.

However, I’m glad that I did it because it’s crazy how many people have experienced something similar. But not many of us actually talk about it. Which is why I wanted to continue the discussion today and take it back a bit to my issues with food guilt that started it all…out loud. 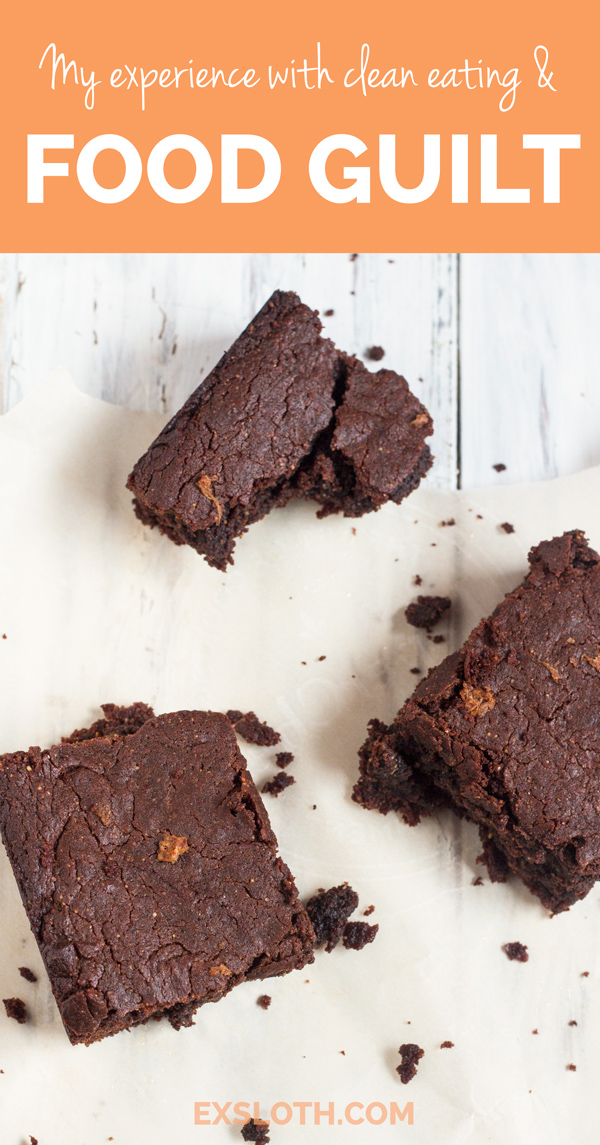 As I mentioned in my last post, one of my biggest problems when it comes to healthy eating is a lack of moderation. It’s so easy to fall into the trap of eating all the healthy whole foods because they’re good for you. Heck, people actually say that on a daily basis.

I see it all the time on blog posts and IG captions and FB statuses and have definitely done it myself. Things like ‘these brownies are made with real ingredients so don’t feel guilty about eating the whole batch or having them for breakfast’.

But the thing is, that thinking is flawed in two ways that I can see.

Because although this is saying not to feel guilty, it implies that if the brownies weren’t healthy then you should feel guilty for eating them. And that way lies madness.

My experience with food guilt

I was pretty restrictive for a little over a year when I first started eating healthier. I was big into ‘clean eating’ and the list of things I wouldn’t allow myself to eat was a mile long and grew longer by the day.

At first I stopped eating a lot of processed ‘junk’ foods because I wanted to get healthier and lose weight. And there was nothing wrong with that. I still maintain that making that change was one of the best decisions I’ve ever made.

But while I may have begun with the best intentions, I eventually went way off script.

You see, by about 6 months in, I was no longer avoiding certain foods because they were unhealthy but because I thought they were bad. Notice I didn’t say bad for you, just bad. Because if the list of approved foods were ‘clean’ then everything else had to be dirty, right?

And that’s where things started to fall apart. Because I began restricting myself more and more and my diet became less about being healthy and more about avoiding that feeling in my stomach when I ate something ‘wrong’. You know, the food guilt.

My perception of food became so warped and it started affecting more than just what I was eating. How I felt about eating also changed. I was always so worried that I may accidentally eat something ‘wrong’ that I no longer found any enjoyment in eating at all. All I focused on was staying ‘clean’.

Which, by the way was still flawed thinking. Because it meant I’d never really been ‘cured’ of my food guilt.

It took a while but it seemed like everything was fine again. I was eating healthy foods and I wasn’t wracked by guilt every time I indulged in something a little less healthy. But we know from last week’s post that in my quest to shed my restrictive diet, I managed to fall into a completely different kind of disordered thinking when it came to food. One that I’m still trying to crawl my way out of.

The thing is, I’m terrified of falling back into the food guilt trap now that I’m trying to lose weight again. I can already feel myself starting to associate some of my favourite healthy foods with that ‘wrongness’. Bananas have too much sugar so I’ve cut down how many I eat in a day.  Quinoa’s okay but I can only have rice occasionally. And the loaf of sprouted bread I bought a few weeks ago is still in the freezer because bread used to be a huge no in my clean eating days.

Basically, I feel like I can only manage the two extremes: food guilt or over indulgence and neither of them has worked out that well for me in the past. So again, the question is, what now?