Did you know that tea at Second Cup costs $2! At first I didn’t think much of how much I was paying at the time, but as I was walking home I got to thinking…I just paid $2 for a tea bag. All the sizes cost the same so it’s not like I’m paying for the cup or anything (I got a medium btw) but I mean $2.

I did a little googling when I got home. Did you know you could get a box of 24 tea bags online for about $5. Clearly I need to open up a tea shop and sell bags of tea for 2 bucks. Blind robbery 😕 lol

Two dollars isn’t a lot when you look at it as just $2, but the price just surprised me today for some reason. Chances are that I’ll be buying more cups of tea in the next month, but it’s still good to be aware.

Now that I’ve got that out of my system, time to get down to business: 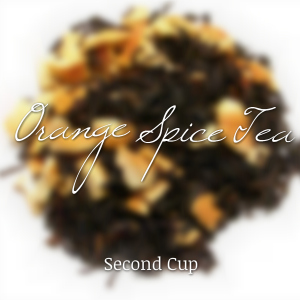 Today I bought a cup of Orange Spice tea from…you guessed it…Second Cup. I was on my way home from class and about half a block after I passed Second Cup, I realised I didn’t have any new teas at home. So I did an about turn, probably looking like an insane person, and grabbed a two dollar cup of tea. (HAHA yes I had to mention the price again…last time I swear!)

So I clearly didn’t prepare this cup of tea myself, that task went to the super happy barista (baristo? it was a guy) behind the counter. I forgot to ask if he did anything special but since I got he tea in like two seconds and it was blazing hot, I’m gonna go with: 1 tea bag per cup steeped for 3-4 minutes in 98°C water. I’m guessing it was made incorrectly – serves me right for buying it – so if anyone knows the correct method let me know in the comments 😀

This tea made me think of first year. In my first year of university I had an obsession with Orange Crush soda (terrible I know). I would have at least one a day. From the first sip of this tea, it was like I was hurtled back in time to my pre-fitness days. Not sure if that was a good experience or not…but it is what it is 😉

The orange was upfront and center in this one. My hands even started smelling like oranges just from holding the cup (through a sleeve!) on the way home. Talk about potent!

Like I said before, the orange spice tea had a similar taste to orange crush soda, just watered down and wayyy less sugary. Not a bad substitute for the real thing if you ask me, but I would recommend having it cold for maximum effect 🙂

Orange Spice tea has a host of health benefits like lowering blood pressure, boosting the immune system and preventing kidney stones. It seems like most teas help your body function better in some way, which is pretty amazing. I hope all this tea drinking has a positive effect on my insides!

…Andddd it’s bed time. I’ve been going non-stop all day so I’m looking forward to an early night.
Thanks for reading and see ya in the morning for the next post in the Workout Wednesday series!

Have you tried the Orange Spice Tea from Second Cup before? What do you think of the price of teas in coffee shops? Let me know in the comment section!