Hello There!
As a novice tea drinker, I had no idea that different teas are brewed in different ways. My experience with tea has, until now, been limited to throwing a tea bag into a cup and pouring in hot water. And apparently…that’s wrong 😕

So, from now on, I will include a ‘preparation’ section teith directions on how to brew the tea of the day.

Yesterday, a reader left a comment that drinking tea is not just about the taste, but about the experience. So I will also be adding an ‘experience’ section to these daily posts. Boy is this thing growing 😀 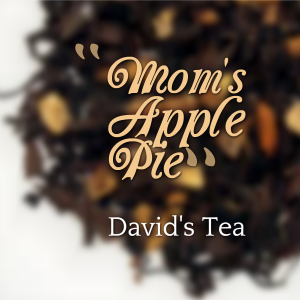 Mom’s Apple Pie tea from David’s Tea is an almost perfect blend of apple and cinnamon. I actually didn’t buy this tea myself, but a friend of mine, who’s kind of a tea buff, happily offered up 1.5 tsp towards my challenge 🙂

Bear with me while I figure this one out, cuz I’m still not sure exactly what the experience is supposed to entail lol. I will say that drinking this tea gave me a measure of comfort and peace for some reason. Even though apple pie never made an appearance in my childhood – it really isn’t that popular in Trinidad – something about it just made me think of family. Go figure.

If my mother ever got a wild hair and decided to make apple pie, I hope it would have smelled like this! This tea is all about the apples. It’s got a fruity scent that just made me long for some apple muffins – which I guess would be my apple pie substitute!

Of course, the apples were front and centre from the first sip. The cinnamon also made an appearance but I felt it could have been a bit stronger (I am a BIG cinnamon lover!). The tea itself went down smoothly, no unpleasant kick or strong after taste. My only problem, was that after the amazing smell, it didn’t taste like the apple-icious baked goods I was imagining, which was a bit of a downer 🙁

Though it isn’t a perfect match for the real deal, this apple pie tea can definitely be used as an after lunch dessert substitute if you’re trying to cut down on sweets but still want a little something!

Overall, David’s Tea’s Mom’s Apple Pie tea (HAHA that was a lot of apostrophes LOL) was a treat. The amazing scent and mild taste made for a great distraction from an afternoon of work :). Just a suggestion though: If you’re not opposed to going without sweetener, like I am for this challenge, try this tea with a little honey. It’s likely to be more reminiscent of your Mom’s Apple Pie that way 😉

That’s it for today folks!

Don’t forget to share your thoughts on Apple Pie tea!