Welcome to the official beginning of my ‘31 Days of Tea‘ Series/Challenge! You can keep track of the series via the 31 Days of Tea tab in the menu. 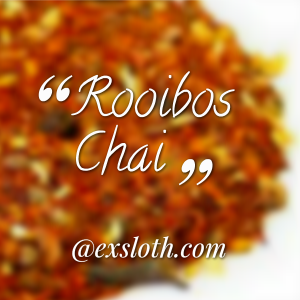 Teavana’s Red Rooibos Chai contains cinnamon, cardamom and ginger. I picked this up at a while ago and have been drinking it sporadically ever since.

I really love how the rooibos chai smells. It’s actually what drew me to it in the first place. I was originally looking for a purely ginger based tea but changed my mind with the first whiff and got this instead.

I’m not going to lie; at first, this tea was a bit too strong for me. Although it’s moderatley light and goes down smoothly, the tea leaves bit of a spicy aftertaste that’s definitely an acquired taste. Luckily, I seem to like it, for the most part 😉

The tea is pretty good for settling stomach aches, probably because of the ginger. It also, in my opinion, leaves you with a slight mood boost – which I definitely needed on my first day of caffeine withdrawal – which was brutal by the way 😕

Obviously I will be drinking this tea again, since it’s not the first time I’ve had it. I like the taste well enough and the side effects are definitely a point in its favour, but the smell alone is enough to keep me coming back for more :grin:. Next time though, I think I’ll try it cold instead of hot, just for a change.

See you tomorrow for the next installment!

What about you? Have you tried rooibos chai before? What did you think? Weigh in below!