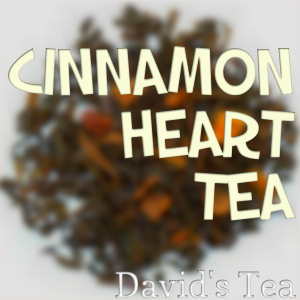 This morning I had a cup of Cinnamon Heart Tea from David’s Tea. It’s a combination of cooked pu’erh tea, Chinese black tea, lemon, cloves and cinnamon. I was a little sluggish and this one has medium caffeine, so I just went for it as soon as I got to work, and it did not disappoint 🙂

I didn’t until this morning. The Cinnamon Heart tea prompted another blast from the past cuz it smelled EXACTLY like big red! It took me a while to figure out what I was remembering but wow if this tea was gum and not tea, it’d be the splitting scent of big red [that sentence made a lot more sense in my brain, but I’m just gonna own it now ;)]

Thankfully the Cinnamon Heart tea didn’t taste exactly like the gum cuz that stuff burned! The tea was much more manageable. It was definitely spicy but it wasn’t unbearable. On another note, this tasted nothing like any of the other pu’erh teas I’ve tried before. There was no wet-cave-ness going on which was definitely a step in the right direction 😀

Aside from the benefits of pu’erh tea (lowering cholesterol), the Chinese black tea in the Cinnamon Heart Tea can also help protect your heart. From what, I do not know, but I thought I’d mention it anyway, cuz I figure heart protection is always a good thing 😀

This was a great way to start off my morning. Usually, I wait until after lunch to have my cup of tea but there’s something soothing about sipping a hot cup of tea while waiting for my computer to load in the morning. There’s no time for me to stress about how long it’s taking or how much stuff I have to do. It just gives my brain a much needed pause before I have to really start my day 😀

Have you tried the Cinnamon Heart Tea before? What did it remind you of? Share in the comments section!