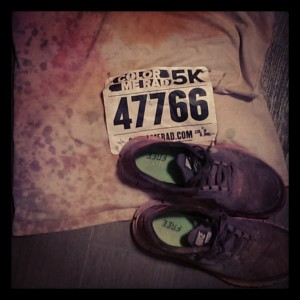 Last Sunday I ran Color Me Rad KW. It was my first 5K ever and I was pretty stoked for the last couple months. I had originally planned to time myself but it was pretty hard to do during this 5K due to the starting and stopping at the colour bomb station, and a couple other obstacles. Nevertheless, I had a good time and do not regret doing it at ALL! If you’re ever considering doing a 5K that involves coloured corn starch or glow in the dark paint or whatever, here are a few things that you may want to consider though:

1. Walk with a picture taker!

I ran the 5K with one other friend and neither of us had our phones or cameras so I have no pictures from the actual race :'(. So if you want pics to remember your big day by, drag an extra friend out of bed so you can have a designated 5K photographer!

2. Watch out for the walkers and the children

Since this was more of a fun 5K than anything else, families were out in full force. There were parents with little children and I even saw a couple people with strollers! Although there was a side for walkers and one for runners, everyone was pretty mixed up by the first block. It was kind of hard to get into a good running rhythm when I had to keep dodging screaming children and slow-moving strollers. 😕

This one isn’t limited to just this type of race, but it deserves a mention anyway. I’m used to running with ankle socks, but for some reason, my socks kept slipping under my heel as a ran on Sunday. It wasn’t super uncomfortable but it was annoying! Also, I’m pretty sure I could have shaved like 10 mins off my time if I didn’t have to keep stopping to pull up my socks :?. I’d recommend wearing higher socks than you’re used to just in case. You don’t want the day of the 5K to be the day your socks decide to start playing hide and seek!

I had a general idea of where the 5K would take me, but the course wasn’t firmly imprinted on my brain and it should have been. At various times during the 5K, I had no idea where we were and therefore, couldn’t estimate how much longer I had to run. Luckily my running partner knew down town Kitchener better than I did and was able to keep me informed 😀

I was a mess after. I knew what I was getting into when I signed up for a race where people would pelt me with stuff, but for some reason it was worse than I imagined! When we got on the bus after completing the 5K, they wouldn’t even let us sit! My Nike frees will never be the same for sure, and neither will my headphones. By the end of the race, my iPod was also an unrecognisable mess of pink, yellow, orange and purple cornstarch. I really didn’t enjoy cleaning that one 🙁

Have you run a 5K before?

What were your thoughts on your first 5K?