This persimmon pear vegan pumpkin galette is flaky, subtly spiced and perfectly sweet. It only calls for 10 ingredients, plus spices and can be ready in under an hour. 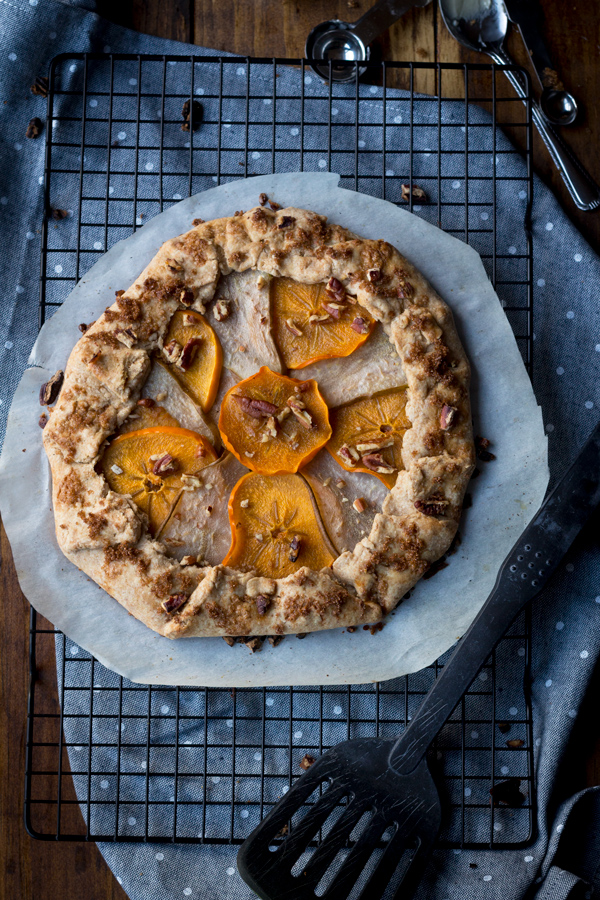 As soon as I made this mint chocolate vegan galette back in June I knew I needed to attempt a pumpkin version for fall/Thanksgiving. Unfortunately, Canadian Thanksgiving came and went long before I was ready to start baking with pumpkin and I never got around to making it.

But with yet another unfinished can of pumpkin in the fridge, I figured now was a good time to share it. Just in time for American Thanksgiving, that I won’t actually be celebrating. But if I was in the US, this galette would definitely be the kind of easy last-minute dessert I’d throw together. 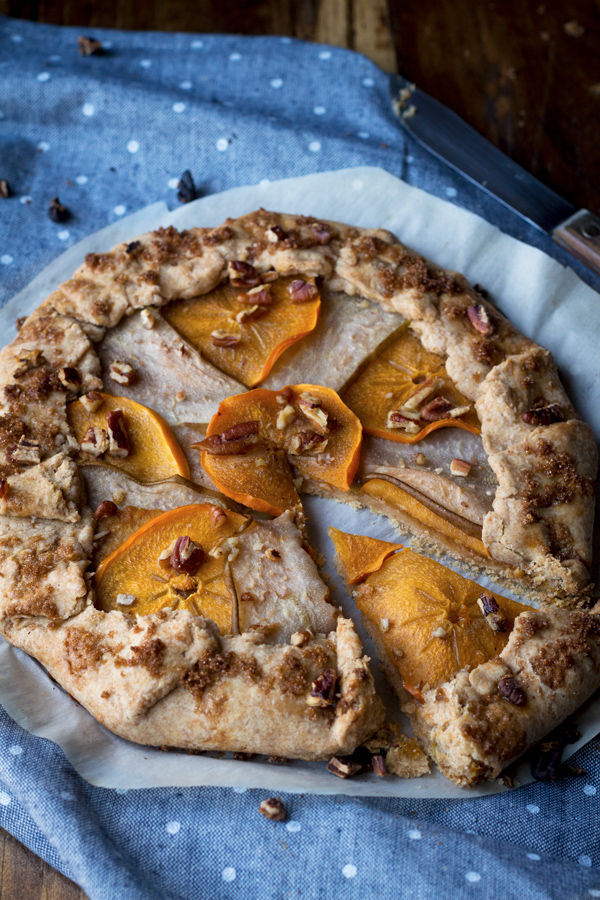 This vegan pumpkin galette is wonderfully simple, doesn’t require any special equipment and only calls for 10 ingredients, plus water and spices. The only slightly ‘out there’ things you’ll need might be persimmons and vegan mayo.

If you’re not familiar with persimmons, be sure to stay away from the Hachiya variety for the recipe. They’re extremely astringent when firm/underripe and make for a less than stellar pie eating experience.

Fuyu persimmons are what you actually want but don’t worry too much if you can’t find them. Pears alone would work beautifully in this galette. 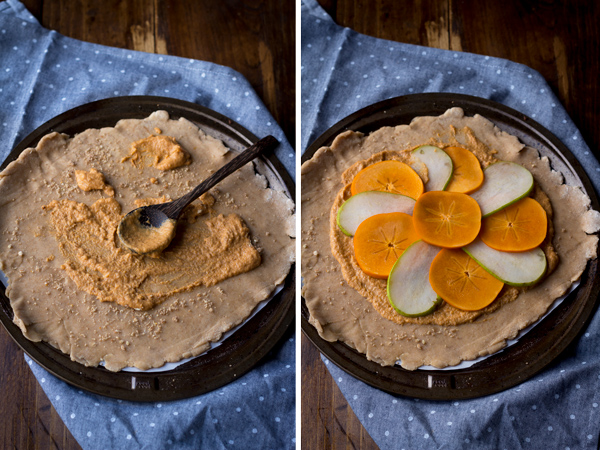 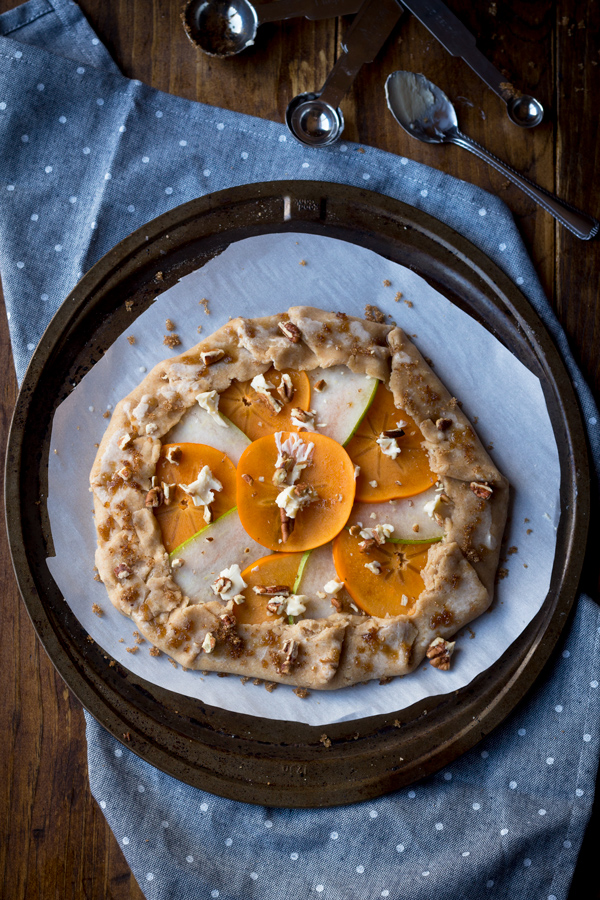 As for the vegan mayo, I used it to replace the egg usually found in pumpkin pie filling. You might be able to use a flax egg or equal parts vegan yogurt instead but I haven’t tested either and can’t guarantee they’ll work.

Other than that, you just need the same coconut oil pie crust from the last time, about 20 minutes of prep work and 25 – 35 minutes in the oven. 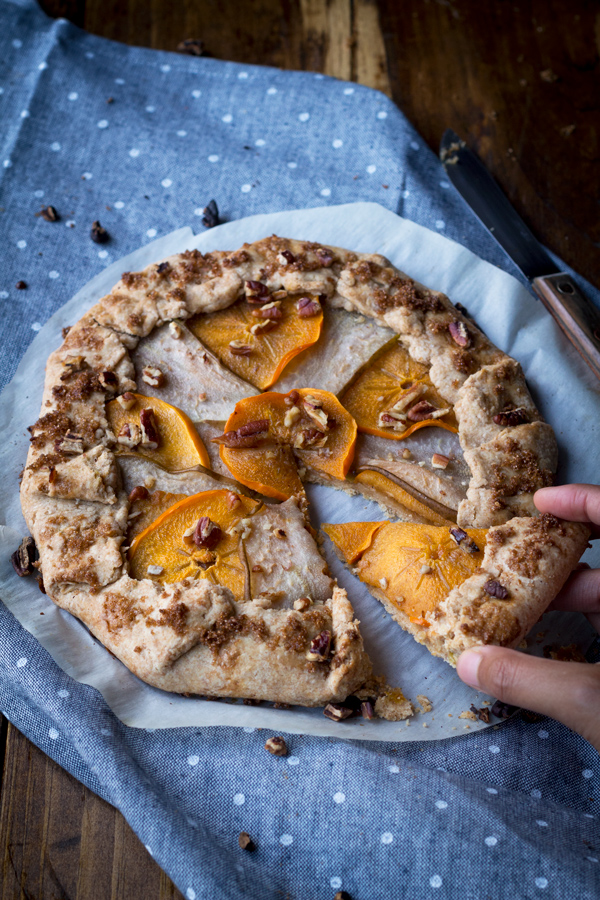 Have you ever make a pumpkin pie before? Is it harder to do than a galette or am I just building it up in my head?

p.s. If you make this pumpkin galette, I’d love to hear what you think. Leave a comment and rate the recipe or take a pic and tag it @ExSloth on Instagram! 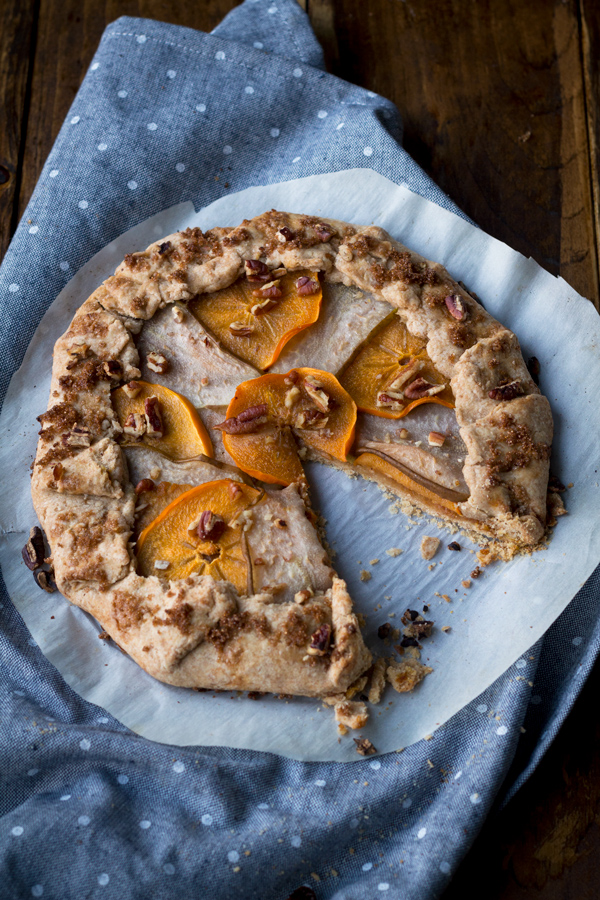 Print
Prep time
20 mins
Cook time
35 mins
Total time
55 mins
This persimmon pear vegan pumpkin galette is flaky, subtly spiced and perfectly sweet. It only calls for 10 ingredients, plus spices and can be ready in under an hour.
Author: GiselleR @ ExSloth.com
Recipe type: Dessert
Cuisine: Vegan
Serves: 8
Ingredients
For the pie crust:
For the pumpkin pie filling:
For the pumpkin galette
Optional ingredients:
Instructions
For the crust:
For the filling:
To assemble the galettes
Notes
* Can sub spelt flour for equal parts all purpose flour but you'll probably need less water
** Can sub cane sugar for equal parts coconut sugar
***
3.5.3217

Want more galettes? Try this one: 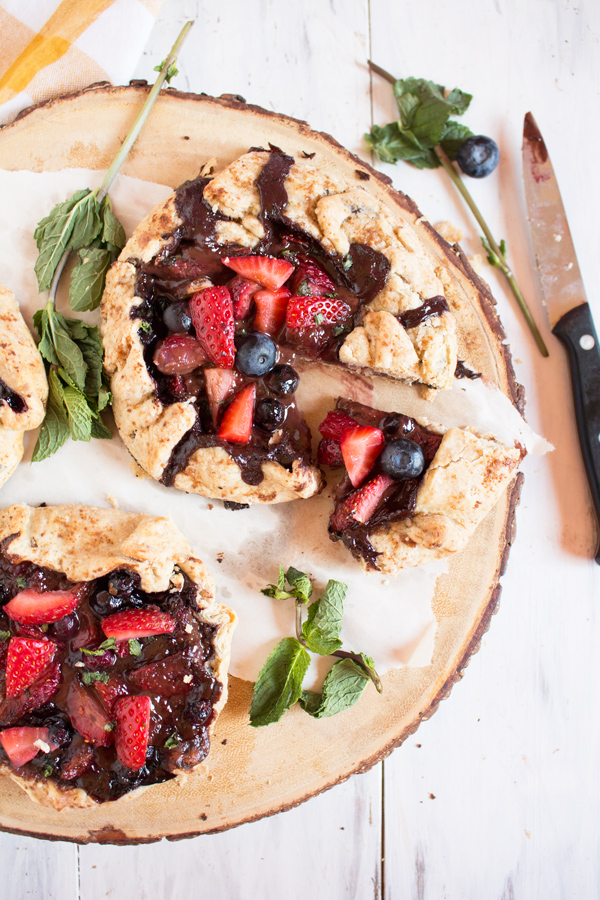