I’ve decided to do away with the scoring for two reasons: 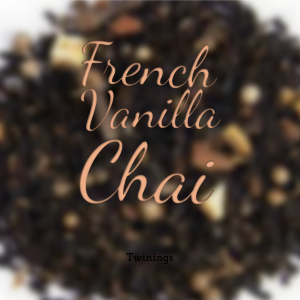 Today’s tea was Twinings’ French Vanilla Chai. I got from a friend a while back and only tried it once before, so I decided to give it another go! According to the box, this black tea is ‘perfectly balanced with the flavours of vanilla, savoury spices of cinnamon, cardamom, cloves and ginger’.

This one is bagged so you just use one tea bag per cup and steep for 3-5 minutes in 98°C water. [Since it’s the weekend I don’t have access to my friend’s plethora of loose leaf teas so I had to make do with the bagged kind. ;)]

The cinnamon/clove combo reminded me a lot of home because my grandmother used those spices together often. I’ve cooked with that combination recently, but for some reason it hit me surprisingly hard tonight 😕 Despite the slight homesickness, it was an excellent way to destress after a long day!

I love the way chai tea smells, so any variation of it smells heavenly to me and this one was no different :-).

The label was correct: the spices in the tea were perfectly balanced 😀 It was a bit spicy, even more so in the after taste, but that really just added to the awesomeness that was this tea! It was so good that I wanted another cup immediately after finishing the first…but I was to tired to get up so that didn’t happen 😐

Chai tea is supposed to be great for stomach aches and overall digestion, but I have yet to personally benefit from those properties. I’m not wishing illness upon myself, but if I ever have to test it out, I’ll let ya know how it works 😉

That’s it for tonight! Check back tomorrow for the next installment of 31 Days of Tea and hopefully, a positive recap of my first 5K that doesn’t sound anything like this!

What are your thoughts on French Vanilla Chai Tea?